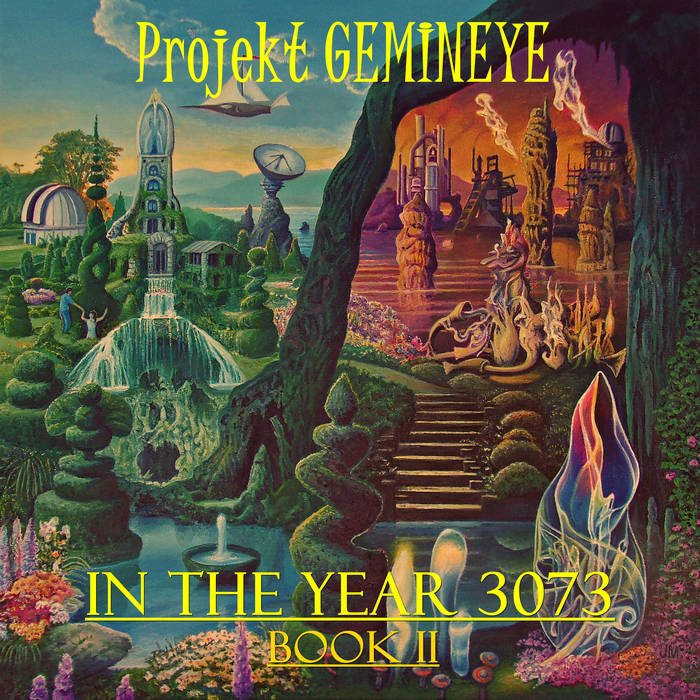 This is the 5th studio album from Projekt Gemineye and the second book of the story of the year 3073. In this book we continue the adventures of Commander Stevenson and his crew, who returned to Earth 1000 years after their forefathers left. Thinking the planet was destroyed they discovered a world of paradise (See Book I) and now have discovered what this paradise cost to achieve.

Here are some quick reviews about the album:

"Projekt Gemineye's "In The Year 3073 - Book II" is the must listen Progressive Metal Album of 2020! This album takes you on an amazing musical journey that you won't want to miss. Pick it up today."

Mindblowingly creative and exceptionally executed, this is an outstanding work of depth and maturity that will leave you engaged and impressed from start to finish. Projekt Gemineye has taken a quantum leap in all areas of artistic expression; from what was already an impressively strong foundation!

It seems like an eternity since the first chapter of Projekt Gemineye’s In the Year 3073 debuted. Book II moves forward, essentially, where we left off.

“Sacred Sons” provided the driving bass and double-drum patterns I’ve come to know and love from Projekt Gemineye. This time, Projekt mastermind Mark Anthony K brought in his Dark Monarch co-conspirator Joe Bailey for a vocal contrast. In the Year 3073: Book II is kicked off in fine form, after the brief opening track, “In the Dark.”

“The Back Streets of Paradise” is up next, with its touches of classic analog keyboard sounds and guitar-chorus effects. Never one to shy away from employing a wide range of guitar textures, Mark Anthony K creates a sonic palette so intriguing that you want the song to stretch on twice its length. The vocals are more restrained than the last song, befitting the dark turn in the story. David Donley provides an emotional presence on the bass, propelling the music forward with a foreboding presence. The end guitar and keyboarding has a hint of Pink Floyd’s Animals era. Given the turn in this story, that’s not too much of a stretch.

“The Great Lie” marks the return of Joe Bailey on co-lead vocals and bass. The osculating keyboards contrast with the acoustic piano sets up a similar contrast with Bailey’s and K’s stories. The voice of the state is powerful and driving, represented by Bailey’s hypnotic vocal and aggressively melodic bass playing.

With its frenzied tom-tom and bass drum onslaught, “Getaway” is bleak and angst-filled. Mark Anthony K’s vocals, over a layer of Geoff Downes-like keyboards, sets an apocalyptic scene that the hero realizes he must be released from. Bailey steps in on the bridge to state the obvious: There’s no way out. This epic song works on many different levels with an equally potent lyrical and musical punch.

The almost Rush-like musical structures “Mastermind” – which includes some of K’s finest acoustic work on a Projekt Gemineye album – is a perfect penultimate song to the album. “The Answered Prayer” closes out In the Year 3073 Book II by bringing in yet another musical heavyweight: Yes’ Billy Sherwood contributes a furious bass track which compliments the continued story of In The Year 3073. While Sherwood has yet to make his proper debut as bassist on a Yes studio album, his playing here is a nice look at what we may hear.

“The Answered Prayer” doesn’t give me a neat ending to the saga. It’s a fittingly aggressive instrumental, but too short at a little over 3 minutes. That leaves the listener begging for the coda of this epic. Luckily, we get just that in early 2021. In the meantime, Projekt Gemineye’s In The Year 3073: Book II is available now via Bandcamp.

Progressive Metal/Rock from Brampton, Ontario.
Formed by Mark Anthony K (ex. Reckon With One and The Exalted Piledriver). Melodic Prog Music in the style of Rush, Yes, Gentle Giant etc..but a little heavier.

Bandcamp Daily  your guide to the world of Bandcamp